Candidates are free to use social media in campaigns but not for malicious statements.

The district police commander (DPC) Kabarole district Mr.Tibakirana Musa has urged all candidates at all levels soliciting for votes this election period to avoid bribery of voters, use of malicious statements, sectarian statements, abusive language & other forms of statements that incite violence during this campaign period.

The DPC was discussing live on ToroDev supported ‘Manya Ekiragiro Kyawe’ program that is aired live on KRC Fm every Wednesday 8:00pm-10pm.
The DPC said for the period since the campaigns started, as a district we have not had cases related to elections and reminded the citizens that police is neutral and that it will accord necessary assistance to candidates equally including personal security & security to election materials ‘’All our work is guided by the constitution of Uganda, police Act & political party Act’’, said Mr. Tibakirana Musa, the DPC Kabarole district.

The DPC requested both candidates & electorates to avoid behaving as if this is the last time we are holding elections. He asked candidates & voters to act responsibly in that if one loses this period, he/she can compete again in the next 5 years.

He urged candidates & their political assistants to avoid the use of abusive language & requested candidates with access to radio stations to use them the right way to solicit for votes and avoid hard words that may cause problems to a candidate and the radio station as well.

We are grateful to all our partners for the financial & technical support.
Posted by Toro Development Network (ToroDev) at 22:55 No comments:

There are two ways in which we can control our economy from losing value as Ugandans and these are through; Monetary & Fiscal policies. Uganda’s economy is affecting the youth mostly because the biggest percentage is unemployed.

This was said by Mr. Bwambale Kadir a lecturer at Mountains of the moon University in Fort Portal during the ToroDev supported ‘Listeners Forum’ program that is aired live every Sunday 8:00pm – 10:00pm on Jubilee radio.

All the three organs of government; Executive, Judiciary & Parliament need to work hand in hand with the bank of Uganda to regulate credit circulation & have selective credit control so that our investment as a country can go to where we can benefit in the next years to come.

Mr. Bwambale further said, as a country we need to encourage more foreign investments whereby investors can invest in setting up big factories and in so doing money will be coming into the country other than being taken away because people will have jobs. Mr. Bwambale also said that government needs to encourage public savings because today people think those earning in millions can be the only ones to save.

Meanwhile Mr. Mutalesa Joseph a lecturer at Uganda Pentecostal University in Fort Portal while appearing live on Listeners program said, government needs to have a social & political will and liberalization of the mind whereby the set priorities on investments can benefit the people in few years.

The 2 hours live radio discussion was joined by listeners through call-inns & Sms platforms and   is hosted by Mr. Mukonyezi Wilfred Abooki.

We are grateful to all our partners for the technical & financial support.
Posted by Toro Development Network (ToroDev) at 04:35 No comments:

ToroDev Staff went for a retreat on 25th -28th of November 2015 in Kalangala District.

The staff retreat was held on 25th -28th of November 2015 in Kalangala District. Six staff of ToroDev went for the retreat and were able to have some time to reflect on the activities of ToroDev, to plan for 2016, find ways of solving the challenges that affect the organization and also staff got skills in financial management and team building from two experts Joy Mirembe and Babirye Brenda from AKAMAI GLOBAL.

ToroDev works with a team which consists of people in a variety of skilled positions needed to implement the project activities for the organization,for any Organization to thrive, economically and socially, it is vital to bring all staff along at every stage, building a healthy corporate culture by addressing the inevitable gaps that open up between the staff and the organizations’ vision.


“Staff retreat offered staff an invaluable opportunity to pause, step back from their everyday duties of working in the Organizations and gain enough perspective to reflect on the organization in constructive ways. The retreat sharpened our focus to clarify the organization’ priorities and boosted the morale of the staff”. Amanya Sheila M&E Officer ToroDev.

During the retreat staff were taken through team building to foster communication flow, trust, disclosure and inclusiveness. Some interactive activities were done to help people feel open, creative and supportive.
“From the training during the retreat I got to know that team building enables open communication among employees and management. This can improve office relationships and in turn, the quality of work done. Team building motivates employees where by team leadership and team building go hand in hand. The more comfortable your employees are to express their ideas and opinions, the more confident they will become. This will motivate staff to take on new challenges”.  Florence Baguma M&E officer ToroDev

Florence added; taking a team outside of an office setting and exposing them to new experiences will force them to think outside of their normal routine. Working together with other team members can ignite creativity and fresh ideas, which are great qualities to bring back to the office.
“In any organization a crisis can happen at any time. Team building activities that require working together to solve problems can improve the ability to think rationally and strategically. Teams that are able to determine when a problem arises and know what they can do about it, can then effectively take charge when a real crisis occurs”. Kugoza David Documentation and communication Officer ToroDev
“From the training we had during the staff retreat I go to understand that team building increases the trust factor with your employees. Often in corporate settings there is a disconnect between the leadership team and employees because the employees sees a big gap between the two. Team building exercises give leadership the opportunity to be seen as a colleague rather than a boss, which  can do wonders for employee morale”. Yampa Grace the accountant ToroDev 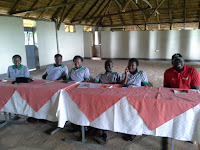 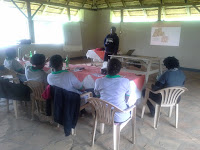 ToroDev staff attending the training during the Retreat in Kalangala

The three days retreat was a successful one and a lot of skills in financial management and team building were gained by the staff.